This summer I’ll be doing something I’ve been meaning to do for a long time… I want to recognize some great books in the zombie/post apoc fiction field. I also want to find some new books I might’ve missed myself, so… 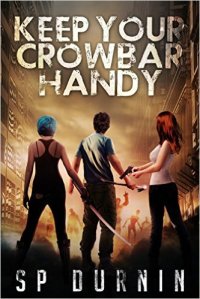 His time spent overseas with Britain’s SAS Regiment still gives him nightmares, his social life is in the toilet, and his best friend is an unrepentant adrenaline junkie.
Unfortunately, just as things finally seem to go his way, decomposing corpses of the recently dead begin rising to gnaw on the living. Soon the streets are glutted with mindless creatures hungering for only one thing: human flesh. Jake’s unlikely group of friends needs to make tracks for some kind of refuge before they end up as Hors d’oeuvres, but how to do that without being turned into drooling maggot-heads themselves?

Now, a burned out combat journalist, a self-proclaimed adrenaline junkie, a health food store owner, and a ditzy pharmacy tech, have to hold their own against legions of walking corpses. At first glance, none of them are likely candidates to survive for long in The Inevitable Zombie Apocalypse.
But hey, stranger things have happened.

Psychopaths, escaped criminals, and para-military white supremacists all stand in their way, not to mention the ever-increasing, zombie hordes. If Jake doesn’t want to become one of the shambling dead he’ll need to keep his whits about him, and his crowbar handy.

KEEP YOUR CROWBAR HANDY drops the reader headlong into a frightening (yet sometimes comedic) zombie apocalypse, literally with a bang. S.P. Durnin captures the craziness of it all by focusing on an unlikely group of potential survivors as they attempt to work together dispite some rather odd personality quirks, not drive each other crazy, and try to stay alive in a world now overrun by the hungry dead. The author combines tongue-in-cheek humor with a healthy dose of gore-soaked apocalyptic adventure, and proves that love doesn’t always conquer all. Sometimes, you gotta use a crowbar…

Living With the Dead is an ongoing survival horror story set in the zombie apocalypse. Its original format was and is a serialized daily blog.

When the world falls apart and the true nature of mankind is revealed, a small group of survivors in Kentucky make a go of holding their ground and building again. Through hordes of undead and bands of ruthless marauders, they come together with a common purpose. Over the days and months, they begin to learn that when the world is filled with the dead, the only choice is to learn how to truly live.

(suggested by Dennis Morel, who said: Excellent eight book series that is probably one of the more intelligent and thoughtful zombie collections out there)

Ten years after the world was nearly decimated by a zombie virus, there is a desperate race for an antidote. A team of commandos are sent to a remote island populated by the undead to rescue a group of stranded scientists . The commandos come up against the hungry dead, Russian mercenaries, and shady government conspiracies. Dead Island: Operation Zulu is a fun, action packed, blood splattered, horror adventure. Dawn of the Dead meets Aliens!

In the tradition of Black Dog & Leventhal’s bestselling

Vampires and Ghosts, this anthology of 32 stories is set in a world where the dead have risen from the grave to consume the living. This rich collection showcases the best of the genre?from short-story masters such as Stephen King, Neil Gaiman, Ray Bradbury, and Poppy Z. Brite; zombie stalwarts such as David J. Schow and Jack Ketchum; “bizarro” founders such as Carlton Mellick III; and popular up-and-comers such as Max Brooks and S.G. Browne?and will satisfy the insatiable hunger of zombie fans everywhere.

A series of captivating essays about zombies in folklore and in popular culture by John Skipp, award-winning zombie anthologist and author, enrich an already extraordinary collection by discussing the past, present, and future of the living dead. And a resources section encompassing the best of long-form fiction, movies, websites, games is included for any reader interested in learning more about the wider world of the undead.

Sure to sate the hungriest zombie fans with classic as well as contemporary servings of tangled entrails and other unspeakable meals, Zombies: Encounters with the Hungry

(suggested by Armand, who said: an older collection with some really great stories in it. A nice mix of authors. My late friend Brandon was reading this when he passed and I took it up and finished it. I’m glad I did)

I am opening this blog up to suggestions from YOU!

I’ll be picking 3-5 each week and I’ll post it up each Thursday on this site and the horror fiction every Tuesday. It’s free of charge. It’s just a way for me to not miss what is out there, too. Hopefully it will become a place where zombie/post apoc readers will enjoy some new suggestions, too. I’ll even let everyone know who proudly suggested it, too!

Send me an email with the title/author and Amazon link to the book and I’ll do the rest. Simple as that!