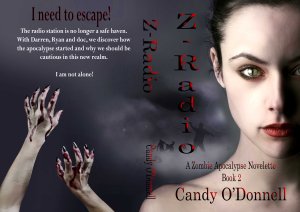 Later that evening I sat near the office and decided to strike out on my own, without anyone else knowing what my intentions were. Words could not describe the feelings twisting within my chest. I felt like somehow I was abandoning those in the building. After one last glance at the station, I strode from the area with Darren, Ryan, and the doc in tow.

We had let in an entire eater pack while the others were sleeping. They hadn’t tied me up that tightly. I knew they wanted to harm me, and it was not my time to die. My heart knew what needed to be done. It was up to me to ensure the three men’s safety after I unbolted the door and let in the hungry horde.

One almost bit Ryan, but Darren was able to stab it in the eye before his arm became chuck roast. That would not have been a pretty sight, and I would have felt so bad if the kid had become an eater.

I knew life would not be easy as I packed some bottles of water and a half dozen power bars into my sack before leaving. I then slowly moved toward the rear of the radio station. I was so quick the enemy never even saw me move swiftly past them. When the door opened the three of us bolted over the asphalt and toward the eight-foot fence that we climbed over together.

The undead gripped the cyclone fencing with their fleshy fingers and shook it violently. That was when I realized those within the station had their hands full of bloody eaters. I wanted to stick around to see the roast, but we needed to get out of there before something happened to us.

Ryan and Darren returned with bags of groceries. Before the apocalypse, we might have spent over eight hundred dollars on what they carted in. They dropped canned goods, such as vegetables and canned fruits, on the kitchen floor. The two women in our group began putting it away in the cupboards. They set what would perish on the table.

We didn’t want anything to go to waste. With the electricity off and our only means of cooking a BBQ outside, we needed to use caution to prevent food rot, so the adults quickly cut up the fruit and fed it to the kids. We knew we could only cook at night to prevent outsiders or eaters from spotting us.

Night fell on our little band of survivors. I had recovered after seeing Greg, and listened to the crickets chirping below. We all knew nothing was there or else all would be quiet. It was nice to hear them for a change. Usually we heard the undead and their tunes.

“I like that sound,” Doc said in a low voice. “I had some in my office just for the noise.” I thought I heard him grin but was not sure.

When they suddenly stopped we did too. It meant something was coming into the yard. Darren had spread out the tarp and the rope ladder was pulled inside, so no one or nothing was going to get us.

A light suddenly shined throughout the entire area, then we heard a male voice say, “They’re not here. I’m not sure why you brought us on this wild goose chase.”

At nightfall, I tracked after Darren and Ryan out the back door and over the small wooden terrace that creaked with each step we took. After stopping many times to look around for any eaters, I decided to hurry toward the wooden fence and peek over. Darkness met my eyes, but in the dimness of the yard, something moved along the far corner of it. I could not make out what it was, but I knew it was not an eater. The shadowy figure was not walking upright.