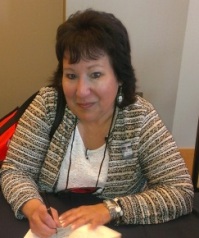 Like any teenager, zombie or not, Becca likes to talk. So I thought I’d give her a chance to share a few things.

Becca Herrera Hayes is the 16-year-old protagonist from GIRL Z: My Life as a Teenage Zombie. She finds her life changed when her cousin comes home, and via an accidental scratch, turns her into a part-zombie. Now she has to cope with a weird diet and changes no teenager wants to go through. As she struggles to cope with her new life, she’s searching for her lost mother with her other cousin/BFF Carm while hoping she’ll find something to stop a full transformation… before it’s too late.

Q: If it’s not too personal, share how you turned part-zombie?

Becca: My other cousin was changing. He came home and scratched me by accident. I was really angry at first, but I know it wasn’t his fault. He wasn’t himself. I do blame him for making stupid choices. He went to work in a lab doing, as his sister says, “who knows what” as “he’s not the most responsible” of guys.

(Note: see what happened to Spence before he came home in the short story, Changes Details at my website, http://cverstraete.com.)

Q: What’s it like being half- zombie? Do you feel ostracized because of it?

Becca: Sometimes. A lot of people don’t understand. I tried going back to school. Bad idea. It was the worst, well, the second worst day of my life. Even the adults were mean. Luckily my family and friends are there for me.

Q: What are your plans for the future?

Becca: I’d like to go back to school. College, which should be better, I hope. I wanted to be a TV broadcaster. Maybe I’ll be able to do that yet. My boyfriend, Gabe, says I can do anything. He’s nice that way.

Q: Have you fought a lot of zombies?

Becca: A pretty lot. In my world here in Wisconsin, they call them the full zombies—the Zs—to distinguish from us part- zombies. They’re the nasty ones, the ones who want to bite and attack you. We don’t do that. I’ve had to protect my cousin since she’s not too good at the fighting stuff, but she’s getting better. She’s been there for me so I look out for her, even if we only started out with poisoned paintballs and BB guns. So far it’s worked okay.

And the author answers a few questions, too:

Christine: I say, why not? What can be worse when you’re 16 then turning into a part-creature and seeing your world turned upside down? Humor, (often more like “gallows humor”) can take the edge off things.

Of course, Becca has her limit, too, as when her would-be boyfriend, Gabe, tries to offer his own lame humor to “lighten” things up with his joke: What do you call a girl on a date who won’t eat?

Q: What’s coming up for Becca?

Christine: On the near horizon, I just completed a “long” short story, “Puppy Love and Zombies,” where Becca faces a couple more zombies – and her fear of dogs – as she solves the mystery of why local dogs are disappearing. It will be in the anthology, Young Adventurers: Heroes, Explorers and Swashbucklers, coming out sometime this summer or early fall.

You can also find out what happened to her cousin Spence before he gets home in Changes, a GIRL Z short story prequel.

* C.A. (Christine) Verstraete is the author of GIRL Z: My Life as a Teenage Zombie and several short stories. See details at her website http://cverstraete.com or visit her blog, http://girlzombieauthors.blogspot.com.